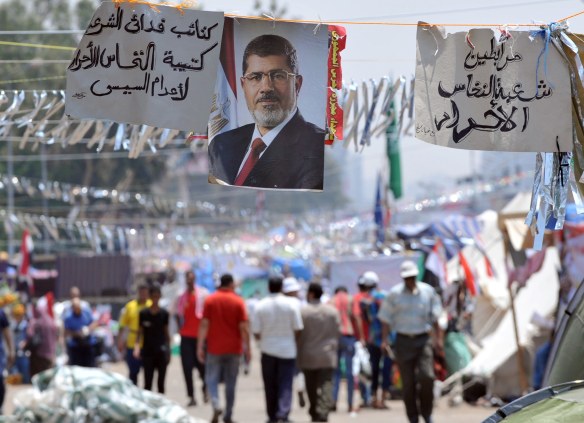 Supporters of Egypt’s deposed president Mohamed Morsi walk past his portrait in Cairo on July 23, 2013 during a sit in outside Rabaa al-Adaweya mosque.
(AFP Photo)

A cloud of rest and calm overshadowed Egyptian streets Friday night after two mega sit-ins set up in support of ousted President Mohamed Morsi were dispersed in a joint effort between the armed forces and the Ministry of Interior.

Pro-Morsi protesters who had been sitting-in around Rabaa Al-Adaweya mosque in Cairo and Al-Nahda Square in Giza were finally reunited with family and friends after over a month of sleeping out in the streets.

Abdel Dayem Mansour, a lower-class, simple-minded exploited man brainwashed by Muslim Brotherhood leaders into joining the Rabaa sit-in, expressed his utter gratitude towards the armed forces and the Ministry of Interior for forcefully dispersing the sit-in.

“I’ve never been more relieved,” Mansour told journalists outside his simple home in Tanta Friday night, having returned there after the tent he had been occupying in Rabaa for a month was tear-gassed then burnt down by Central Security Forces. “Those national heroes from the army and the police freed me from this ugly sit-in. I have been missing my family too badly. Every time I told those evil spearheads at Rabaa I want to go home, they would threaten to burn me alive. They bribed me with food and money too. I pretended I was satisfied, but deep down, I would lock myself inside my tent and heartily cry while reading the armed forces’ sentimental leaflets.”

The armed forces had dropped leaflets on the pro-Morsi sit-ins, calling on the protesters to go home and promising them they would not get persecuted if they do so.

“I was a bit distressed at seeing my tent-mate Masoud shot dead by the police while dispersing the sit-in, but alas! It’s such a small cost compared to today’s great victory,” Mansour said.

The Ministry of Health announced on Friday afternoon that 670 pro-Morsi protesters and three security personnel were killed during the sit-in dispersal mission. Screaming while being pulled into a police car, Muslim Brotherhood spokesman Gehad El-Haddad claimed over 2000 “brave, free men, women and children” were “massacred” to silence the “voice of freedom”.

El-Haddad spelled-out his twitter account’s password to a seemingly sympathetic bystander during his arrest, urging the uninvolved man to tweet that grave piece of information in English, state-owned news agency MENA reported. The Brotherhood spokesman’s twitter account was deactivated shortly afterwards. The Ministry of Interior’s media office stated it’s exerting “magnanimous” efforts to “unravel the mystery behind this puzzling deactivation incident”, adding that it is not unlikely that the deactivation was carried out by one “honourable citizen”.

Meanwhile in Egypt’s streets, thousands of demonstrators marched to Tahrir Square and the Itehadiya presidential palace to applaud the Minister of Defence and General Commander of the armed forces General Abdel Fatah Al-Sisi for “meeting his promise to terminate violence and terrorism.” Al-Sisi had called on all Egyptians to take to the streets on 26 July to “delegate the armed forces and the police to fight violence and terrorism”.

“I can now walk freely in my street and sleep peacefully on my bed knowing that those animals at Rabaa will no longer build toilets within the sit-in to accommodate themselves,” said Sayed Ashraf, a resident of Maadi.

“This is a great day for nationalism and nasserism,” Sabahy said in a personal tweet. “As Gamal Abdel Nasser before him, General Al-Sisi succeeded in silencing the Muslim Brotherhood for at least fifty more years to come.”

Tamarod rebel campaign, the grassroots campaign launched in late April 2013 to collect signatures calling for the ouster of Morsi, assured the diligent followers of its Facebook page that they might as well forget the Muslim Brotherhood ever existed. “They’re a thing from the past now,” said campaign founder and spokesman Mahmoud Badr. “Rest assured the NSF and other liberal movements will have the upper hand in politics regardless of how terribly they suck at it.”

Ministerial veteran and twitter activist Hazem Abdel Azim also shared the general army applause sentiment. He tweeted that if not for the “immense amount of deadly arms the Nahda and Rabaa sit-ins harbour, those sit-ins should have been dispersed long ago for housing such a large number of sheep”. “Sheep” is a widespread expression commonly used to describe Muslim Brotherhood affiliates.

The armed forces spokesman released a statement on his official facebook page listing the arms which were confiscated during the dispersal mission.

“5000 Grads rockets, 3 tanks and 15 army jets were confiscated from the Rabaa sit-in, alongside a collection of RPGs, AK-47s, firearms and fireworks,” the statement read. “The Nahda sit-in hosted twice the number of weapons, plus 65 military uniforms tucked under the main stage in front of the Cairo University gate.”

The statement explained that late at night, pro-Morsi protesters would dress in the army uniforms, take the AK-47s and shoot at fellow protesters to make it seem like the army was attacking the sit-ins. “And the army is innocent of such serious crimes, needless to say!” the statement added.

The armed forces spokesman detailed the dispersal mission. He stated Central Security Forces arrived first at both sit-ins to completely surround them. Protesters became on alert and began loading their weapons, the spokesman narrated, such movement triggered the security forces’ instinct regarding an imminent threat, a matter which necessitated they start randomly shooting at protesters to scare them off.

“Human rights activists might wrongfully claim we excessively used force to disperse the sit-ins,” the armed forces spokesman said in the statement, “yet, if only they knew the amount of self-restraint we had to exercise to keep the death-toll so low! If we indeed used excessive force, at least 2000 would have been killed.”

The statement revived El-Haddad’s claim about the “actual” death toll, only the twitter account was deactivated and El-Haddad was suspended from his arms in his prison cell … he had his hands full and thus was incapable of sharing his thought with his followers.

“Sleep soundly people of Egypt,” ONTV anchor Gaber Al-Qarmouty greeted his viewers Friday night after a day-long live coverage of the events, “for terrorism is eliminated. Egypt is ours again and we have but God, the armed forces and General Abdel Fatah Al-Sisi to thank for such a blessing.”

Both Rabaa and Al-Nahda sit-ins were set-up shortly before Morsi was ousted by Al-Sisi. Al-Sisi’s decision to oust Morsi came after millions took to the streets on 30 June calling for early presidential elections.

Minister of Information Doria Sharaf Al-Din announced, on behalf of the cabinet, that the Rabaa and Nahda sit-ins are a threat to national security in a press conference on Wednesday.

Sharaf Al-Din announced that the cabinet “delegated the minister of interior to take all measures, according to the constitution and law, to face violence and terrorism. Consequently the minister is to take all necessary measures to disperse protests or sit-ins at Rabaa Al-Adaweya and Al-Nahda Square.”